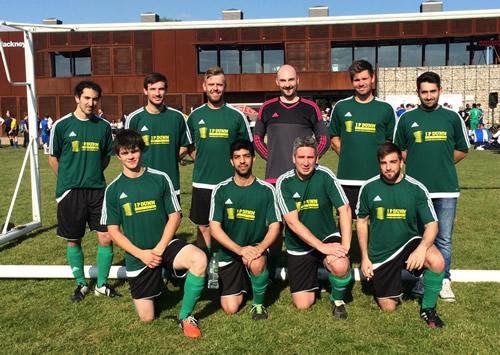 J P Dunn Construction’s 7 aside football team have made their competitive debut under the captaincy of Mick Wehrle, in a charity event hosted by Brookfield Multiplex. The tournament marked the return of the company to the South Marsh Community Hub where they were previously awarded the Concrete Society Certificate for Excellence for concrete quality. On this occasion there was to be no award to take home.  Having topped their group of four without conceding a goal in the three initial games, hopes were high going in to the last 16. Unfortunately the team went out in a controversial penalty shoot out after goal keeper Stephen Walls was adjudged to have left his line as the oppositions penalty hit the foot of the post. The retaken penalty sentJ P Dunn Construction out of the competition, albeit without letting in a goal in open play. Success beckons on another day and everyone admired the kit!

Categories: Miscellaneous
Previous Next
Back